Noah Snyder and I have just uploaded to the arxiv our paper Non-cyclotomic fusion categories.

In their paper On fusion categories, Etingof, Nikshych and Ostrik asked if every fusion category can be defined over a cyclotomic field. This is supported by the following facts:

A fusion category is a rigid monoidal category which is semisimple and has finitely many (isomorphism classes of) simple objects. It is tempting to think of them as the common generalization of representation categories of finite groups and of representation categories of quantum groups at roots of unity (these provide many of the most interesting examples), but our result shows that this is a little dangerous. In particular, Etingof, Nikshych and Ostrik’s question can be answered in the negative:

Theorem (Morrison-Snyder): one of the fusion categories coming from the Haagerup subfactor cannot be defined over any cyclotomic field.

Our approach makes detailed use of the construction of the Haagerup subfactor via its planar algebra in Emily Peters’ thesis, and the corresponding construction of the extended Haagerup subfactor. This approach proceeds by establishing that any subfactor planar algebra with the desired principal graph must contain an element which has moments (traces of powers) and “twisted moments” which evaluate to particular scalars, and then finding such an element inside a larger (but non-subfactor) planar algebra. The essential insight of the current paper is that the principal even part of such a subfactor must contain the twisted moments in its field of definition.

in a fusion category, and an endomorphism

, we can choose maps

to be the dual maps, and abuse notation by thinking of

copies of itself. At this point, we can define the third twisted moment of

, by the following diagram: 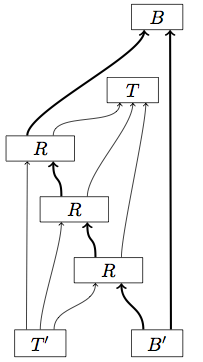 This diagram evaluates to a scalar, but this scalar depends on the choices of

so it is not an invariant. We choose

are the projections onto the two simple objects

. For any complete rational form you can find

inside it. Now notice that

are well-defined up to a choice of scalar. (The former just uses that

is self-dual. The latter uses something very particular about the even part of Haagerup.)

-th power of the circle; this expression is homogeneous of degree zero with respect to the ambiguity coming from our choices, and so must lie in the ground field for any rational form.

Next, we observe that the third twisted moment is relatively easy to compute, in the original planar algebra. We choose

as in the diagram below:

Possible values for B and T in the planar algebra

Thus third twisted moment is given by the following diagram in the planar algebra:

The third twisted moment, in the full planar algebra

5 thoughts on “Some fusion categories are not cyclotomic (January)”