My CAREER grant includes funding for a thesis-writing fellowship for graduate students who have done extraordinary teaching and outreach during their time as a grad student.  If you know any such grad students who are planning on graduating in the 2018-2019 school year please encourage them to apply.  Deadline is Jan 31 and details here.

While I’m shamelessly plugging stuff for early career people, Dave Penneys, Julia Plavnik, and I are running an MRC this summer in Quantum Symmetry.  It’s aimed at people at -2 to +5 years from Ph.D. working in tensor categories, subfactors, topological phases of matter, and related fields, and the deadline is Feb 15.

One of my amateur interests is paleontology. Paleontologists looking for new examples have two options: go out in the field and dig up a new example, or go looking through drawers of museums to find old examples that had been overlooked. In this blog post I want to give an interesting example of the latter kind of research being useful in mathematics. Namely in discussions with Zhengwei Liu, we realized that an old example of Ocneanu’s gives an answer to a question that was thought to be open.

(as suggested by Evans-Gannon). The simplest examples of these kind of “close to group” categories, are called “near-group categories” which have only one non-invertible object and have the fusion rules

for some group of invertible objects

. A result of Evans-Gannon (independently proved by Izumi in slightly more generality), says that outside of a reasonably well understood case (where

and the category is described by group theoretic data), we have that

must be a multiple of

. There are the Tambara-Yamagami categories where

Here’s the question: Are there examples where n is larger than

-graded part of the quantum subgroup

from Ocneanu’s tables here. I’ll explain why below.

END_OF_DOCUMENT_TOKEN_TO_BE_REPLACED

This may not be of interest to most of our readers, but I have sad news that’s relevant to many of the bloggers. Last weekend Raleigh’s burned down. It was the traditional place for beers after the seminar for which this blog is named, and the first draft of my qual syllabus was originally written on a Raleigh’s napkin (back when they had napkins that were perfect for writing math on). It’s always sad to lose a place that felt like home. Have a drink outside in memory. 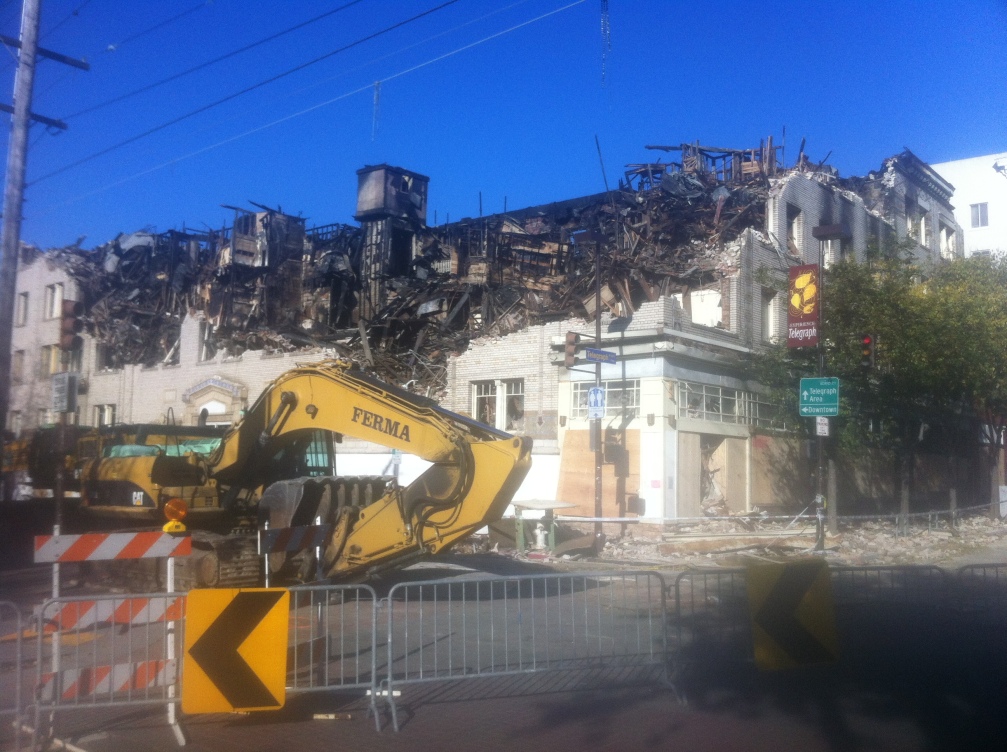 The NSF recently announced some new policies concerning work-life balance. There seems to have been a publicity push about it on the part of the White House, as it made the regular news. The main changes seem to be adding flexibility to grant rules for new parents. Mostly pretty obvious stuff like letting people delay the use of their grant if they go on parental leave. Good ideas to be sure, but mostly just catching up to what they already should have been doing.

This reminded me of one of my favorite ideas I’ve heard for an NSF policy change which would help career-life balance. Currently the MSPRF postdoc policy reads:

The suggestion is to change this by adding the line:

Nonetheless, if the fellow has a partner who is unable to procure a job near the sponsoring institution, and both the fellow and their partner have job offers in other city, that will be considered compelling circumstances.

Masaki Izumi, Vaughan Jones, Scott Morrison and I recently uploaded to the arXiv the 3rd and final part of the four part series “Subfactors of index less than 5.” This is a project we’ve been working on for a long time (since Emily, Scott and I started running Planar Algebra Programming Camps in spring of ’08), and after three years and a lot of work from many people it’s very exciting to finally have made it there.

In this post I’ll state the main theorem, say a few words about the history, and then explain the main takeaway lesson we learned in this project.

END_OF_DOCUMENT_TOKEN_TO_BE_REPLACED

As mathematicians we spend most of our lives confused about something or other. Of course, this is occasionally interrupted by moments of clarity that make it worth it. I wanted to discuss a particularly pleasant circumstance: when two confusions annihilate each other. I’ll give two examples of times that this happened to me, but people are encouraged to provide similar examples in the comments.

In both cases what happened was that I had:

END_OF_DOCUMENT_TOKEN_TO_BE_REPLACED

Any semisimple algebra object in a fusion category

First I’ll unpack the definitions in this statement and then I’ll explain how Artin-Wedderburn for semisimple algebras over a fixed field k follows from this statement. I’ve been thinking about this theorem because Pinhas Grossman and I have been using it to classify “quantum subgroups” of the Haagerup fusion categories, but that’s a story for another day.
END_OF_DOCUMENT_TOKEN_TO_BE_REPLACED

or matrix algebras over the quaternions

. It is a well-known and fundamental fact that the Brauer group is isomorphic to the second Galois cohomology

is the seperable closure of k.

What I’d like to explain in this post is a follow-your-nose proof of this isomorphism which comes from thinking about fusion categories. Namely, attached to any fusion category there is a very natural object called Brauer-Picard groupoid (introduced by Etingof-Nikshych-Ostrik). For the special case of the fusion category of vector spaces over k the Brauer-Picard groupoid has a point for every seperable extension of k and the group of automorphisms of the point k gives exactly the Brauer group. However, one can also look at the group of automorphisms of other points, in particular the point

. The group of automorphisms of that point is instead naturally isomorphic to the Galois cohomology

. Since the groupoid is connected we see that the Brauer group coincides with the Galois cohomology. In fact, there’s a natural choice of arrow from

and so a natural choice of isomorphism between the two groups.

This example came up in work in progress with Pinhas Grossman where we compute the Brauer-Picard groupoid of the fusion categories which come from the Haagerup subfactor. As we’ll see the automorphism group of a point in the Brauer-Picard groupoid has a subgroup consisting of certain “outer automorphisms.” I wanted to have a good example in hand where the outer automorphism group of different points were different in order to test certain lemmas. The example in this post is as extreme as things can get, for

there are no nontrivial outer automorphisms, while for

It is a truth universally acknowledged that journals fail to add significant value in a way that justifies their high prices (we write, typeset, referee, edit, and they do basically nothing except charge an arm and a leg for it). However, I think it is underappreciated the ways in which some journals actually take away value. Typically by wasting our time with bad interfaces or imposing unreasonable typesetting/file format requirements. I’m in the middle of a particularly hellacious experience with the Journal of Functional Analysis (whose support staff have been unhelpful on top of incompetent) but I’ve also run into similar inconveniences with IMRN (where at least the support staff was helpful in getting around the problems).

Suppose we lived in a world where journals did the following

That to me is the baseline of how things should work (and is roughly how things do work at many journals: ANT/G&T/AGT obviously, but also CMP/JAMS/Acta were more or less similar). Anything else the journals do beyond that should add value rather than remove it. Here are ways that journals often remove value:

Any other important ways that journals remove value that I’m missing?

UPDATE This post has been attracting an extraordinary amount of spam. (See post above.) I (DES) have changed the title to see if that helps.

This fall I’ll be teaching my first regular college class (I’d only taught sections at Berkeley, though I suppose the summer sophomore tutorial I taught at Harvard might count). It’s on group representation theory, which is my favorite subject, so I’m excited about it. I was just thinking about some possible homework problems, and I got to thinking about creative and unusual grading schemes I’ve seen in previous classes I’d taken, and figured that might make a fun blog discussion topic. (Since this is my first time teaching I won’t be experimenting with any unusual grading this time around, though I think it might be interesting to try one of these in the future.)

Redos:
At the Ross summer math program if you don’t answer a problem satisfactorily then you get a REDO. This means you’re expected to go back and redo the problem and get it right. I’ve never seen this tried in a regular class, but I think it could be a good idea for an “intro to proof writing” class. The point being that in such a class the material itself isn’t super important, and so if you do fewer homework problems total but learn how to do them right that’s a good tradeoff.

Grading out of many points:
When I took group representation theory from Richard Taylor, the exams were graded out of a ridiculous number of points. A 5 question midterm would be out of 600 or so points. At first glance this seems silly (and it certainly would be a bad idea for a class with multiple graders where you want consistency between graders), but it actually works very well. Here’s the point: if someone does something you don’t like no matter how small it is you can take off points! Unclear sentence? Minus 1. Used the wrong terminology? Minus 3 points. This way the grader can effectively communicate relatively small shortcomings in your write-ups, which wouldn’t be possible if you were grading out of a smaller number of points.

Perfection bonus
This idea comes from a class that I didn’t take our first year of grad school with Givental, so perhaps someone who took the class can correct me on the details. The basic idea that was for the final in addition to points for each problem you got, there was a pool of extra points which you got if you never wrote anything false on the exam. But as soon as you wrote something that was wrong you lost those points. This is good training for graduate students who soon won’t have graders telling them when they made a mistake, and it’s a good way to keep people from spewing nonsense in an attempt to get partial credit. If I remember correctly the perfection bonus was quite substantial (I want to say it was worth as much as a full question on an exam where you need a little more than 2 correct solutions.)

What do people think of these ideas? Any other interesting grading schemes you’ve heard of?