As mathematicians we spend most of our lives confused about something or other. Of course, this is occasionally interrupted by moments of clarity that make it worth it. I wanted to discuss a particularly pleasant circumstance: when two confusions annihilate each other. I’ll give two examples of times that this happened to me, but people are encouraged to provide similar examples in the comments.

In both cases what happened was that I had:

END_OF_DOCUMENT_TOKEN_TO_BE_REPLACED

Vaughan Jones often quips at the beginning of talks on Planar Algebras (see these lectures, for example) that the worst thing you can say about Planar Algebras is that they have not yet yielded a proof of the 4-color theorem. In this post I’ll sketch how a common “evaluation algorithm” (used by Greg Kuperberg and by Emily Peters, for example) almost proves the 4-color theorem. I believe this (failed) argument is due to Penrose, though I’m taking it from an article of Chmutov, Duzhin, and Kaishev and some notes of John Baez’s. There are some more elaborate attacks (by Kauffman, Saleur, Bar Natan, and probably others) that I won’t discuss at all. This is the second of what hopefully will be a short series of posts on “evaluation algorithms” (the first was on the Jellyfish algorithm).

The outline of the post is as follows. First I’ll explain a standard reduction of the 4-color theorem to a question about 3-coloring edges of trivalent graphs. Second I’ll explain why 3-colorings of edges is a question about finding a positive evaluation algorithm for a certain planar algebra. Third, I’ll discuss “Euler characteristic” evaluation algorithms. Fourth I’ll explain how this technique almost answers the 4-color theorem.
END_OF_DOCUMENT_TOKEN_TO_BE_REPLACED

Stephen Bigelow, Scott Morrison, Emily Peters and I have a preprint up on the arxiv today about the extended Haagerup subfactor and its planar algebra. Scott already explained nicely the story that this paper fits into. Today I wanted to tell you about one of the key elements of this paper, Stephen’s “Jellyfish algorithm.” This algorithm is a kind of “evaluation algorithm” and I hope to get around to putting up some more posts on some other evaluation algorithms as well as some open questions concerning evaluation algorithms (one would prove the 4-color theorem and another is related to whether the exceptional lie algebras aren’t so exceptional after all).

What is an evaluation algorithm? Well suppose you have a bunch of diagrams (think formal sums of links) constructed out of a few generators (think crossings) modulo some relations (think the HOMFLY relations). There are two obvious questions. Are these rules enough to reduce every link to a constant times the empty diagram? Does any way of reducing a given diagram give the same answer? Usually the former question is substantially easier than the latter. Often the first question is answered by giving an explicit algorithm for simplifying diagrams.

One simple example is the Kauffman bracket description of the Jones polynomial. Here the evaluation algorithm is very easy: find a crossing and resolve it, wash, rinse, repeat. This clearly terminates because at every step you get fewer crossings.
END_OF_DOCUMENT_TOKEN_TO_BE_REPLACED

The European Math Society Publishing House (a non-profit publishing company which also publishes the Journal of the EMS, CMH, and half a dozen other journals) just announced a new journal: Quantum Topology. I think this is very exciting as it fills a nice hole in the existing journal options. The list of main topics include knot polynomials, TQFT, fusion categories, categorification, and subfactors. So there should be lots of material of interest to people here.

Following on from Noah’s post about the great Modular Categories conference last weekend in Bloomington, I’ll say a little about the talk I gave: Extended Haagerup exists!

, as long as you change the pivotal structure). The type D planar algebras (with principal graphs the Dynkin diagrams

) were the subject of Noah’s talk at the conference, and the

But what happens as we go above index 4? In 1994 Haagerup gave a partial classification up to index

. He showed that the only possible principal graphs come in two infinite families

This result really opened a can of worms. Which of these graphs are actually realised? (Hint, they’re nicely colour-coded :-) What about higher index? What does it all mean? Are these graphs part of some quantum analogue of the classification of finite simple groups? Read one for the answer to the first question, at least.

END_OF_DOCUMENT_TOKEN_TO_BE_REPLACED

This is the third and final post in my series about using planar algebras to construct TQFTs. In the first post we looked at the 2D case and came up with a master strategy for constructing TQFTs. In the last post we began carrying out that strategy in the 3-dimensional setting, but ran into some difficulties. In this post we will overcome those difficulties and build a TQFT.

END_OF_DOCUMENT_TOKEN_TO_BE_REPLACED

In my last post I explained a strategy for using n-dimensional algebraic objects to construct (n+1)-dimensional TQFTs, and I went through the n=1 case: Showing how a semi-simple symmetric Frobenius algebra gives rise to a 2-dimensional TQFT. But then I had to disappear and go give my talk. I didn’t make it to the punchline, which is how planar algebras can give rise to 3D TQFTs!

In this post I will start explaining the 3D part of the talk. I won’t be able to finish before I run out of steam; that will have to wait for another post. But I will promise to use lots of pretty pictures!

END_OF_DOCUMENT_TOKEN_TO_BE_REPLACED

So today I am giving a talk in the Subfactor seminar here at Berkeley, and I thought it might by nice to write my pre-talk notes here on the blog, rather then on pieces of paper destined for the recycling bin.

This talk is about how you can use Planar algebras planar techniques to construct 3D topological quantum field theories (TQFTs) and is supposed to be introductory. We’ve discussed planar algebras on this blog here and here.

So the first order of buisness: What is a TQFT?

END_OF_DOCUMENT_TOKEN_TO_BE_REPLACED

Last week I talked about the Temperley-Lieb algebra – the algebra of boxes with n top points connected in a non-crossing way to n bottom points, with multiplication as stacking boxes.  Some of you may have noticed (but weren’t picky enough to point out) that I didn’t specify whether AB meant A on top of B, or B on top of A.  Of course, it doesn’t really matter, but we should pick one, right?

But wait … why are these two stackings the only candidates for multiplication?  Why shouldn’t we multiply by connecting the right side of a box to the left side of the next box?

or by connecting some top points and some bottom points of each box?

by connecting any point of the first box to a point of the second, and the rest of the points to the boundary: 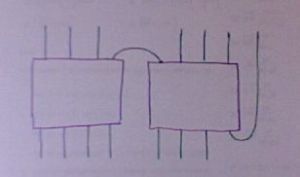 Everything I’ve drawn above is an example of a “planar tangle” – and the trace we used last week is also a planar tangle, which takes

In general, a planar tangle is a diagram where the strings of k input boxes and an output box are connected among themselves in non-crossing ways.  Here’s another example – which is a fine planar tangle, although it’s not clear that it should have any particular meaning if we let it act on Temperley-Lieb inputs.

Planar tangles can sometimes be composed with each other:  we can connect the output of one tangle to the input of another tangle, if both have the same number of strings.  Here’s an unnecessarily complicated example:

Notice that in the LHS, we have labels 1, 2 and 3 in the boxes — this is just so we know what order to do the compositions in.  In the MHS, we’ve stuck the tangles in the boxes they go into; and on the RHS, we’ve discarded the information of the old boundaries and isotoped the strings to make a nicer picture.

The set of planar tangles, with the operation of composition, is an operad.  (I’m not going to tell you what an operad is in general, but if you’re curious  http://homepages.ulb.ac.be/~fschlenk/Maths/What/operad.pdf is a nice introduction.)  A planar algebra is, basically, a representation of the planar operad:  a family of vector spaces with an action by planar tangles which is compatible with composition.

Temperley-Lieb is not just the simplest and most natural example of a planar algebra; it’s also one of the most important ones.  Coming soon:  Some other examples!

Sorry for the delay, Scott’s been in town and so I’ve been too busy doing actual research to get much blogging done. This post was also a little delayed because I didn’t understand this example as well as I’d hoped. I still don’t fully grok it so maybe you all can help me out. If you don’t follow this example, don’t worry, we’ll be moving on to pictures in the next post.

Take a finite group G. Let C[G] denote the group algebra and let F(G) denote the algebra of functions on G with pointwise product (that is F(G) has a basis of elements of the form

in which case it is

, whereas for the latter

acts on a tensor product via

We define a bioidal category called the “group Subfactor” as follows