During the fifth week of Mathcamp we let the campers vote on which classes they want to take, and so there’s often a few difficult but exciting classes. One that I attended (along with our own Scott Carnahan) was Mike Shulman’s on the field with one element.

The first day of the class was a delightful trip through counting problems in finite dimensional linear algebra. He derived the formulae for the number of flags and for the number of subspaces of a given dimension. Things were set up well enough that one of the students pointed out the analogy with factorials on his own. The first day ended with the fact that the q=1 limit of these formula gives formulas from combinatorics. This motivated the goal of finding a definition for the field of one element whose linear algebra is combinatorics.

The next two days were a bit trickier going, Mike gave a definition of the field with one element taken from the recent giant paper by Nikolai Durov. The key notion here is a module over an algebraic theory. This notion is very similar to that of an algebra over an operad.

An algebraic theory is collection of n-ary operations together with a rule for composing them. Think of an n-ary operation as a machine with n inputs and 1 output, composition is a way of plugging some operations into another. However, the big difference with operads is that in a theory you can plug the same thing into different holes, or plug an output into no input at all. The only two requirements are the existence of an identity 1-ary operation and associativity of composition.

The basic examples are all similar to the examples of operads. Mike mostly concentrated on the example of R-modules. Here the n-ary operations are

with the r’s in some ring R. The rule for composition is (just one simple example to illustrate the general rule)

A module over a theory is a like an algebra over an operad. It is a way of plugging in actual elements of some set into the inputs and getting an actual output. For the theory of R-modules, a module over the theory is just an R-module.

If R is a commutative ring, then the theory of R-modules has a rather surprising property, namely it is a “commutative theory.” That is, 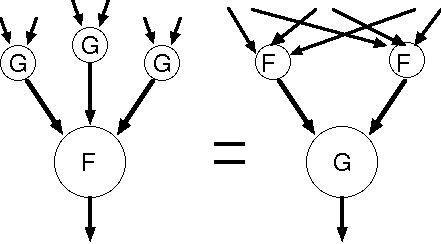 When is a commutative theory just the theory of R-modules for some ring R? First off, there needs to be 0, which means that there’s a unique 0-ary operation [ed. Mike points out that uniqueness follows from existence]. Having an addition turns out to be shockingly week, all you need is a 2-ary operation with the property that 0+a = a = a+0. That plus commutativity gives all the necessary properties of addition! This is enough to force the theory to be R-modules for some rig R. Getting a minus requires a certain 1-ary operation -.

The field with 1 element is just the initial commutative theory with 0 (but not with addition). That is it has n+1 different n-ary operations, one of which is called 0 and picks out a marked point, and the other n pick out each of the n different points. Here’s one example of such an n-ary operation where only one of the inputs gets sent through and the others are ignored:

9 thoughts on “The Field With One Element”