I’m sorry for having disappeared for so long, and I promise I’ll get back to my series on planar algebras soon. I’ve been busy writing papers and couldn’t really justify to my coauthors why I’m not writing our papers and instead writing math on the internet. However, Saturday I was in San Francisco without access to LaTeX, and Malia was at her spinning guild, so here’s a post!

P.S. Below the break I’ll walk you through understanding much of the representation theory of the small quantum group for

at a third root of unity, assuming you already understand the representation theory of the usual lie algebra

. It’s an interesting example to work through because the representation theory is not semisimple. There will be lots of fun pictures. The choice of a third root of unity isn’t important here, everything would work similarly for any odd root of unity.

at a third root of unity. That is, let

and the following relations:

(so called because it has highest weight

with the action give by:

As usual with the representation theory of

Now that we have one representation we can try taking tensor powers of it and decomposing (for this you need to use the usual Hopf algebra structure). The tensor square breaks up the way you’d expect as the trivial representation

. Here are the pictures for these representations

It’s not hard to see, using the usual highest-weight yoga, that these three represetations

are the only finite dimensional irreducible representations of the small quantum group. In the classical case we can use the action of the Casimir element to distinguish these three representations and show that they lie in different blocks (that is there are no extensions between them). However, in the small quantum group case the quantum casimir element acts by 2 on

. Thus there could be extensions between

. In fact there are, for example the baby Verma module

So, we take the tensor product

. From the classical case we would expect to get

, however instead we have a single six-dimensional indecomposable representation (note that when there are two arrows with the same label coming out of a dot that means that the vector is sent to a linear combination of two other vectors): 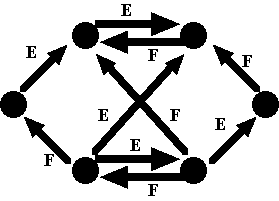 What do the four “weight spaces” going left-to-right mean? After all,

only has three possible eigenvalues (

). Nonetheless the small quantum group is naturally graded, and since

was a graded module, every tensor power of it will also be. So even though the highest weight-space on the right and the lowest one on the left both have

, it still makes sense to draw the picture the way I’ve drawn it.

As you can see this representation, which we’ll call

(because it is the restriction of a tilting module) is rather complicated. It has a 2-dimensional submodule isomorphic to

. This is a 12-dimensional representation. From the classical case we would expect to see

. The two copies of

you instead find the following indecomposable representation

Now it turns out that

. So at this point the process stops and we’ve found all indecomposible representations which are summands of tensor powers of standard representation.

Okay, what’s left to understand about this category of representations? We know that the objects are

. We know some of the tensor product rules, and the rest aren’t too difficult to work out. For example, in the Grothendiek group:

But since these representations are indecomposable instead of irreducible, we should also understand what their hom spaces look like. That’s also not so hard to work out, the only maps are the zero maps, the identity maps, and the following additional maps:

7 thoughts on “Representations of the small quantum group”